John Huston’s film “The Man Who Would Be King” (1975), based on the novella by Rudyard Kipling, has much to teach us about our holy faith…

Two rebel soldiers from the British army, Daniel Dravot (played by Sean Connery) and Peachy Camehan (Michael Caine) seek adventure in an expedition to Kifiristan, somewhere beyond the Khyber Pass. By making themselves indispensable to the villagers, and accomplishing some pseudo-miracles, one of them, Dravot, is acclaimed as king. Moreover, when he is brought to the high priest of the region, who sees a Masonic amulet around his neck, he is acclaimed as a god and the long-expected successor of Alexander the Great (who considered himself the son of Zeus). At first, this new “god” does good to his worshippers, settling their disputes and leading them to undertake useful projects, while becoming very rich himself. When the snows melt, Camehan urges his friend to get out while the going is good and return to India across the Khyber pass. However, Dravot has become so enamoured of his role that he declares he will marry a native girl, Roxana (the same name as Alexander the Great’s Persian wife). This upsets the locals who say that a god cannot marry a mortal women – he will burn her up in his divine fire. But the new god insists; and at the marriage ceremony, as he tries to kiss the terrified Roxana (who clearly believes he is a god), she bites him, drawing blood. Seeing the blood, the high priest declares that the soldier is neither god nor devil, but an ordinary man and orders him to be seized. The two soldiers flee the city, but are overpowered. Dravot marches across a bridge over a ravine that he himself had ordered built and when the ropes are cut he plunges thousands of feet to his death, chanting ”The Son of God Goes Forth to War”.Carnehan is crucified between two pine trees but, on being found still alive next morning, is freed. Crippled in body and unhinged in mind from his ordeal, he eventually makes his way back to India as a beggar, always keeping his hand on Dravot’s head. Finishing his story, he leaves Kipling’s office after putting a bundle on the desk. When Kipling opens it, he finds Dravot’s severed head, still wearing a golden crown.

Let us examine the meaning of this parable.

Christ asked His disciples: “Who do men say that I am?” And then He put them another question, the most important question that will ever be asked of any man: “Who do ye say that I am?” On answering this question correctly depends our eternal salvation.

With God’s permission, many false christs are gone out into the world in order to deceive men into giving the wrong answer to this question. If they are not atheists, then men give wrong answers to this question because they have already enthroned another man – or demon – in place of the true Christ. And if they are atheists, then they have put themselves in the place of Christ as the highest object of their worship.

All men begin their earthly journey as rebels from “the regular army”, the celestial army of those who obey God. They are rebels because in them is original sin, which alienates them from God and urges them to undertake hazardous adventures in order to satisfy their avarice and lust. Sometimes, even while on the path to doing evil, they are able to do good to men. These pseudo-good works deceive them into thinking they are on the right – or, at any rate, on a permissible – path. Reaching a pinnacle of worldly success, they compound avarice and lust with ambition and pride and, succumbing to the praises of deluded men, deify themselves in their own eyes. However, if God counts them worthy, they are allowed to fall from the pinnacle of worldly power and glory and to become aware of their miserable mortality. As the Scripture says: “I said, Ye are gods, and all of you the sons of the Most High. But like men do ye die, and like one of the rulers do ye fall” (Psalm 81.6-7).

For the price of this recovery of true spiritual sight is death – death to the world, and, very often, death at the hands of the world, which instinctively resists truth and destroys those who destroy its own comforting delusions. The man who has made himself into a god must die, and so must his friend, the false prophet who conceals the deception and even confirms it. However, there is a great consolation to such a death: by the mercy of God, it is counted as death for the true God, martyrdom for Christ.

In the film, Dravot goes voluntarily to his death chanting a hymn to the true Son of God. So he is a holy martyr. His friend Camehan does not die. But he suffers for the truth; so he is a holy confessor. Moreover, Camehan takes his friend’s skull with him as a holy relic, which he adorns with a crown, to help him endure his much-suffering life on the edge of madness (for there is something “crazy” in having beliefs contrary to those of the overwhelming majority of men).

All true Christians are martyrs and/or confessors. They have died to the world, renouncing their own fallen passions, which generate idolatry – the worship of anything or anyone other than the true God.  And they venerate those who have died as martyrs before them, adorning their relics and icons, in the hope and firm faith that these saints will through their intercessions bring them to live with themselves in “Mount Zion and the city of the living God, the heavenly Jerusalem” (Hebrews 12.22).

Sunday of the Holy New Martyrs and Confessors of Russia.

Lord Jesus Christ Have Mercy On Me! 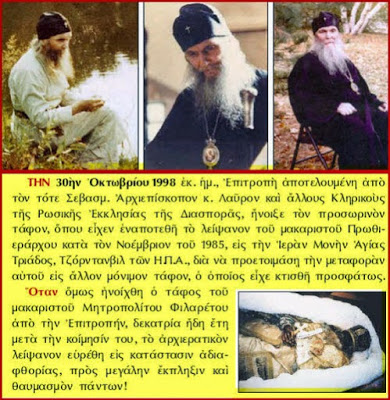